Onwards to the Riviera Maya!

Geoff and I got married back in August of 2011 (pretty photos here  courtesy of Lara Luz) and never really got round to our honeymoon. We actually intended to head to Vanuatu while we were living in Melbourne, but then moving to Toronto sort of put it on the back burner a bit….well a lot.

So we decided since we would be travelling to Mexico for the wedding it would be a fantastic opportunity to go somewhere new and actually have our honeymoon.

What appeared on Instagram from our time in Riviera Maya 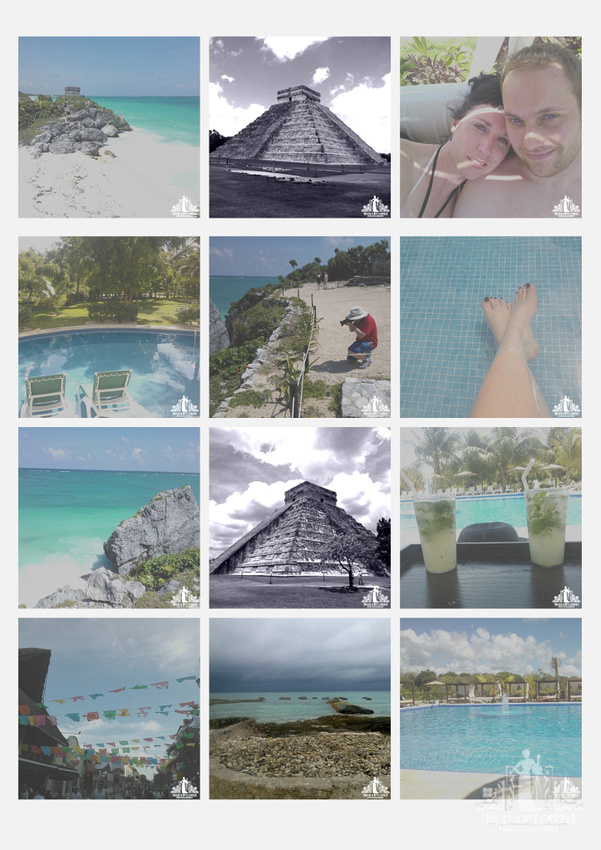 We stayed at the gorgeous El Dorado Royale (recently of Real Housewives of Atlanta fame – I rewatched the episode when we got back so I could squeal “we went there” multiple times), an adults only, all inclusive resort. We opted for a swim up suite which was very conveniently a 100m lazy river walk to a swim up bar – how convenient! Being our first all inclusive experience, I was a little apprehensive but the food was amazing and I must have drunk hundreds of pina coladas/mojitos/raspberry coladas during my stay.

Geoff was kept happy with hundreds of iguanas lounging around the resort and even managed to hand feed a big male iguana a hibiscus flower. We tried to befriend the cats, especially the beautiful black mama cat with 3 gorgeous little silver tabby kittens but they were very wary of people so we could only admire from a distance (I did manage to sneak some bacon away from breakfast and leave it in one of their little hideaways).

Since we also celebrated our 11 year anniversary over this past weekend, we had a beautiful candlelight dinner on the beach as an early celebration – you get the idea below (although this was from a couple of nights later when there was the most amazing moonrise). 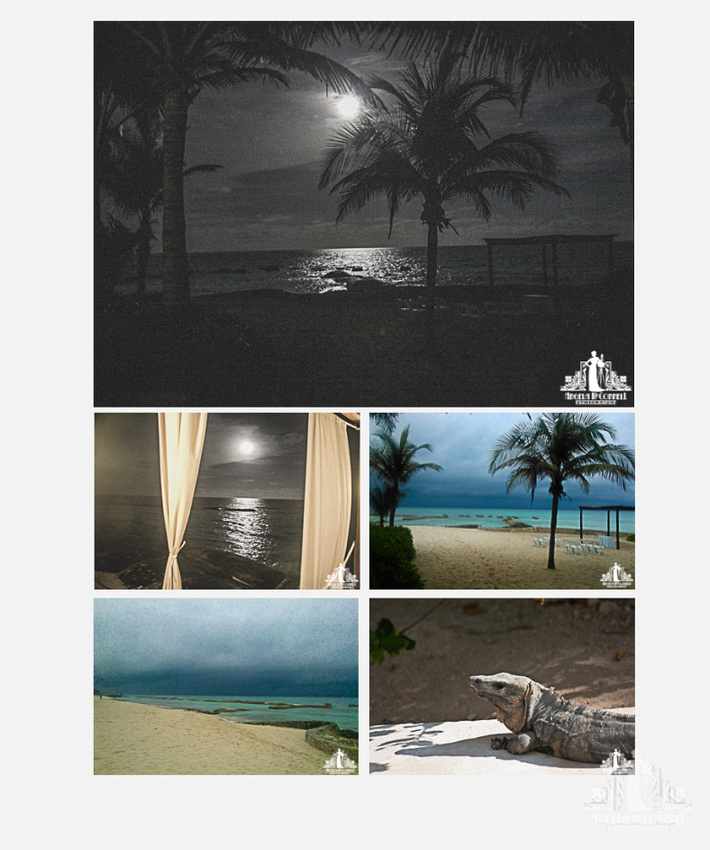 Although I took a lot of pleasure in lounging poolside in a cabana, having drinks brought to me every 10 minutes, we did actually manage to leave the resort a couple of times. One reason that we chose the Riviera Maya is because we both enjoy historical sites and ruins, so both of our tours were focussed on Mayan culture and history.

Our first tour was of Coba. The ruins at Coba are around 120 steps (42 metres) and you can still climb them (unlike at Chichen Itza where climbing stopped in early 2006). I only made it about 3/4 of the way up before I got too close to one edge, looked down the side, then looked down behind me and completely freaked out. I thought I was going to fall off. Geoff was really good in trying to encourage me to keep going since we didn’t have much further to the top but I was really done. I did manage to get a photo from where I was before I had to bum slide down each step.

They also had ruins of a tournament arena where the opponents had to booty block a ball up an incline and pass the ball through the limestone hoop. The winner became the sacrifice, unless you were lucky enough to be of powerful standing and only need to offer a blood sacrifice. 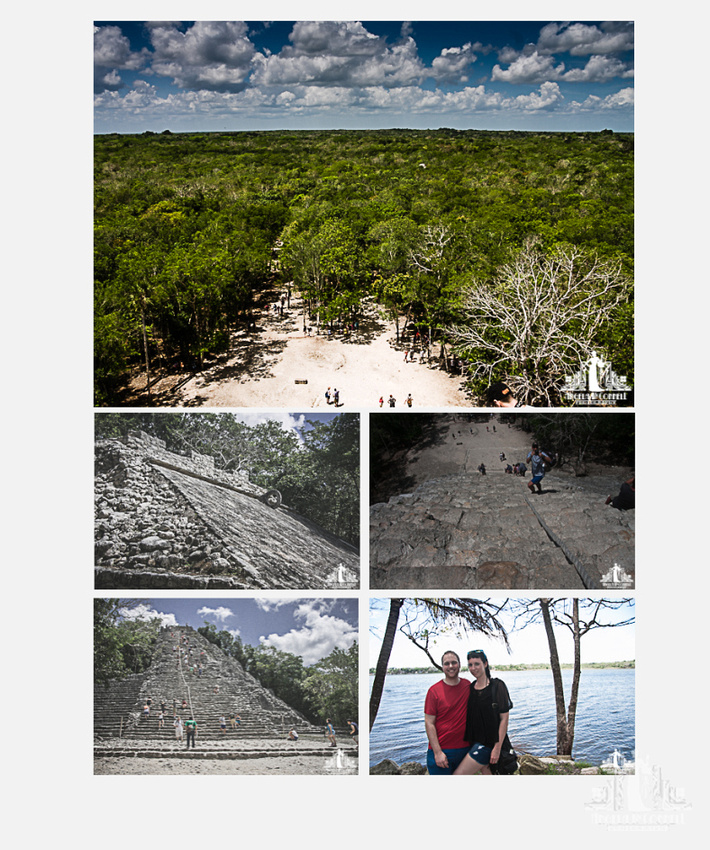 After Coba and a delicious local buffet lunch with a very refreshing local lager, we travelled on towards Tulum.

Mayan ruins at Tulum within a walled city 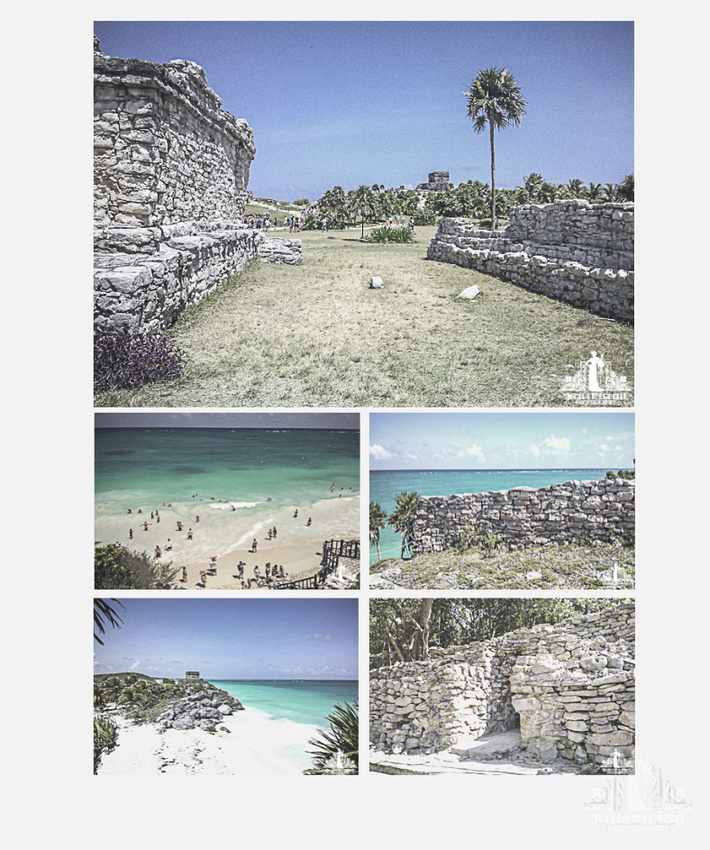 Geoff took some more opportunities to take photos of iguanas, because these iguanas were obviously different from the iguanas at our resort – iguanas on ruins! 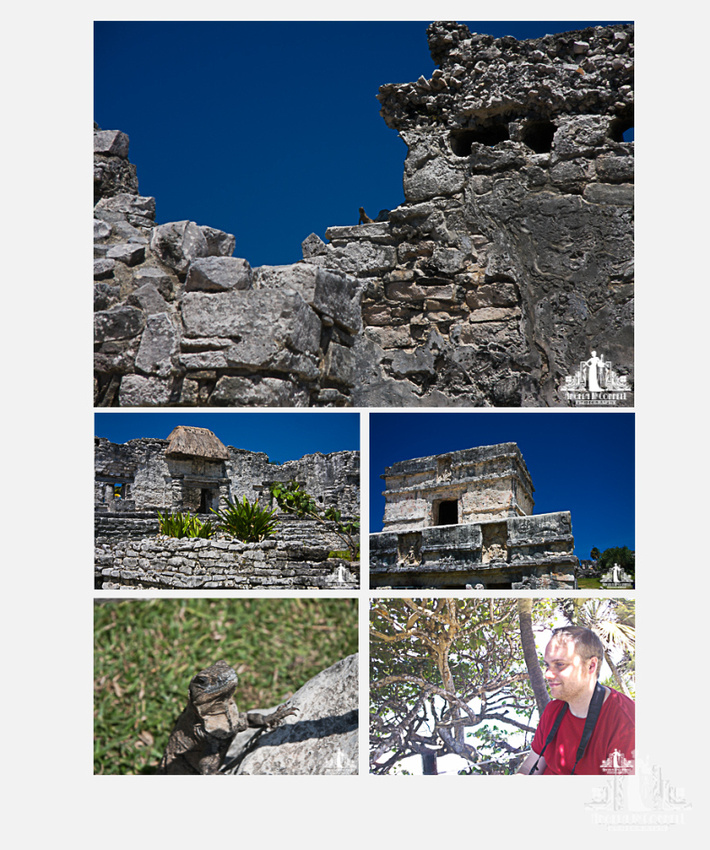 Our next tour was to Chichen Itza which is one of the modern wonders of the world. I loved seeing the restored sides of the monument compared with the unrestored, and the scale of it when you see a person looking up at it in the photos.

After visiting Chichen Itza, we drove to a nearby ceynote. This one was the Ik Kil Ceynote which is around 350ft deep and has little blind catfish swimming in it. Geoff took these photos since I was busy swimming in the FREEZING cold water! I was ok until I saw the catfish, and then also when another couple asked me to take their photo. Trying to remain afloat while taking photos and not dropping the camera in a 350ft deep ceynote is quite challenging! 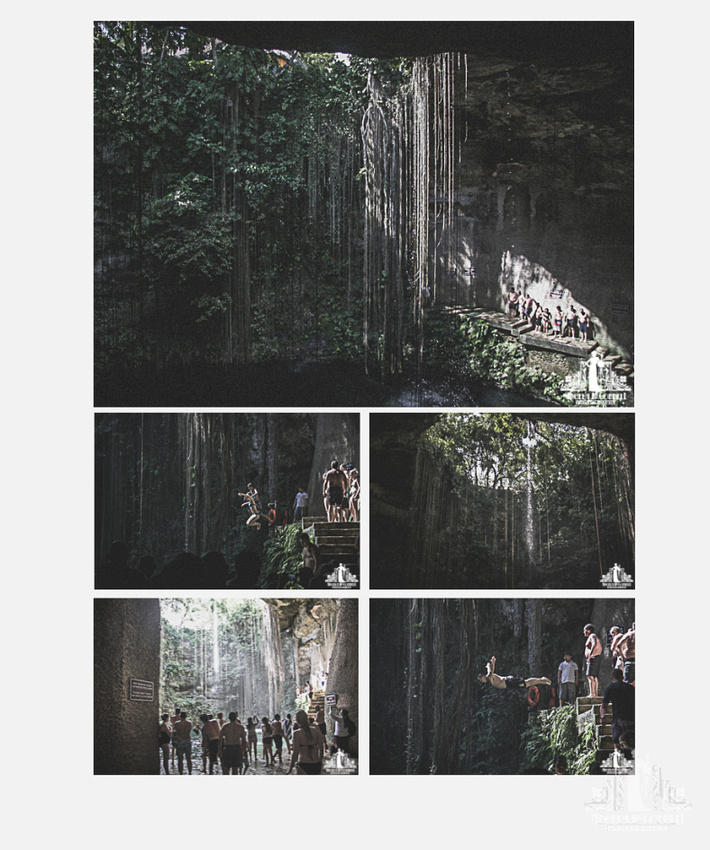 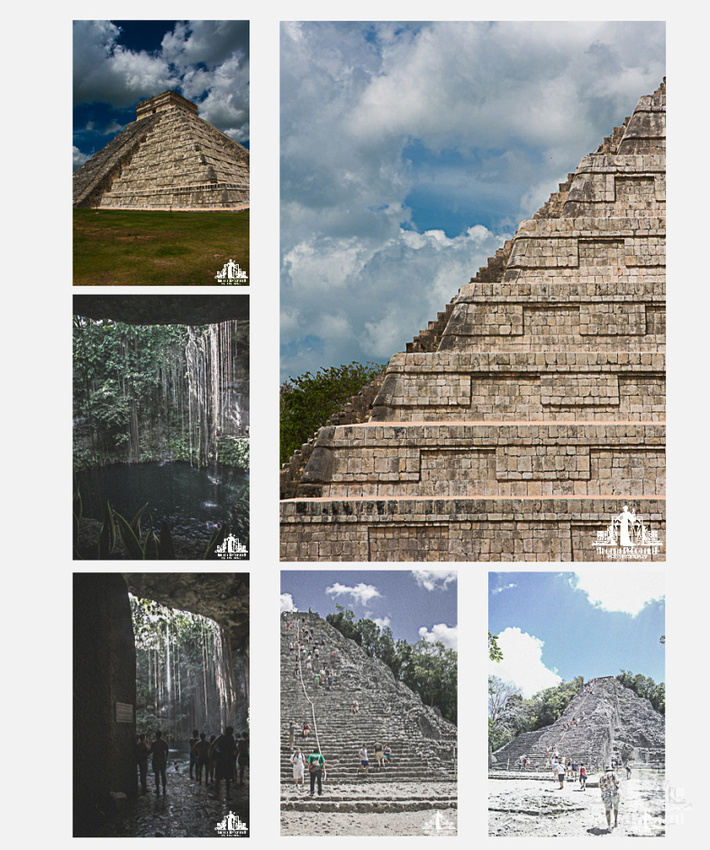